/ /
 E-mail: info@cngoshen.com
You are here: Home » News » Company news » The US no longer imposes new tariffs on Chinese products.

The US no longer imposes new tariffs on Chinese products.

In 29th, President Xi Jinping met with US President Trump in Osaka. The two heads of state exchanged in-depth views on the fundamental issues concerning the development of Sino-US relations, the current Sino-US economic and trade frictions, and international and regional issues of common concern, and directed the development of the relationship between the two countries in the next phase, agreeing to promote coordination, cooperation and stability. The tone of Sino-US relations. 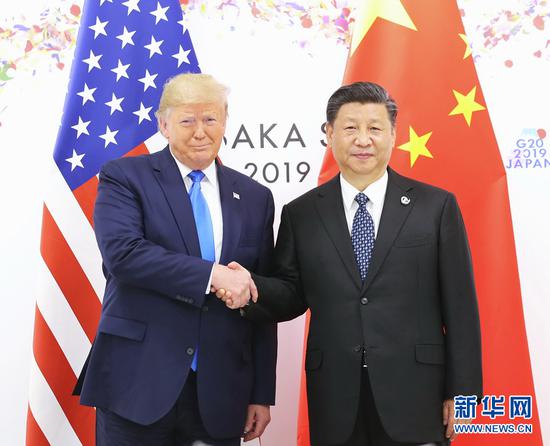 Xi Jinping pointed out that Sino-US relations are one of the most important bilateral relations in the world. Looking back on the 40 years since the establishment of diplomatic relations between China and the United States, the international situation and the relations between the two countries have undergone tremendous changes, but a basic fact has not changed. That is, Sino-US cooperation is both beneficial and painful, cooperation is better than friction, and dialogue is better than Good confrontation. At present, China-US relations have encountered some difficulties, which is not in the interests of both sides. Although China and the United States have some differences, the interests of the two sides are highly harmonious and the areas of cooperation are broad. They should not fall into the trap of so-called conflict confrontation, but should promote each other and develop together. The President has stated on many occasions that he hopes to do a good job in Sino-US relations. He also expressed his 100% approval of mutual respect and mutual benefit. This is the right direction we should firmly grasp. The two sides should maintain exchanges at all levels in accordance with the principles and directions set by me with the President, strengthen cooperation in various fields, and jointly promote Sino-US relations based on coordination, cooperation and stability.

Trump said that he is very happy to meet with President Xi Jinping again. I still remember the visit to China in 2017, which is my most enjoyable visit. I have seen with my own eyes the extraordinary Chinese civilization and the great achievements China has made. I am not hostile to China and hope that relations between the two countries will get better and better. I cherish the good relationship with President Xi Jinping and are willing to strengthen cooperation with China. Trump said that the US and China will work hard in accordance with the principles and directions set by the two heads of state to jointly promote US-China relations based on coordination, cooperation and stability, and expressed the belief that the US-China summit will vigorously promote the US. The development of China relations.

I hope the US will treat Chinese enterprises and international students fairly.

Regarding economic and trade issues, Xi Jinping emphasized that fundamentally speaking, the essence of Sino-US economic and trade cooperation is mutual benefit and win-win. China and the United States have huge interests and the two countries should become good partners for cooperation. This is beneficial to China, to the United States, and to the whole world. The Chinese side has the sincerity to continue negotiations with the US to control differences, but the negotiations should be equal, embody mutual respect and resolve their respective legitimate concerns. On issues involving China's sovereignty and dignity, China must safeguard its core interests. As the world's two largest economies, the differences between China and the United States will ultimately be resolved through dialogue and consultation to find mutually acceptable solutions.

Xi Jinping emphasized that China hopes that the US will treat Chinese enterprises and Chinese students fairly, and ensure the normal cooperation between the two countries' economic and trade investments and the normal exchanges between the two peoples.

Trump said that the US hopes to properly resolve the trade balance between the two countries through consultations and provide fair treatment for enterprises of both countries. The US will no longer impose new tariffs on Chinese exports. I hope China can increase imports from the United States. The US is willing to reach a mutually acceptable trade agreement with China, which will be of historical significance.

The US no longer imposes new tariffs on Chinese products.

The two heads of state agreed to restart economic and trade consultations on the basis of equality and mutual respect, and the US no longer imposes new tariffs on Chinese products. The economic and trade teams of the two countries will discuss specific issues.

Trump said that there are many very good students in China. I have always welcomed Chinese students to study in the United States.

Xi Jinping reiterated China's principled stance on the Korean Peninsula issue and said that China supports the leaders of the United States and the DPRK to maintain dialogue and contact. It is hoped that the United States and the DPRK will show flexibility and move in the same direction, and resume dialogue as soon as possible to find a solution to each other's concerns. China is willing to continue to play a constructive role in this regard. Trump said that the US attaches importance to China's important role in the Korean Peninsula issue and is willing to maintain communication and coordination with China.

Ding Xuexiang, Liu He, Yang Jiechi, Wang Yi, He Lifeng, and US State Secretary of State Pompeo, Finance Minister Mnuchin and many other senior government officials attended. According to Xinhua News Agency

Trump: US companies can continue to sell parts to Huawei

At the press conference after the closing of the G20 summit, Trump said that US companies can continue to sell parts to Huawei.

Trump also said that every year American companies benefit from tens of billions of dollars in selling goods to Huawei. When asked if he would remove Huawei from the "entity list" of US export controls, Trump said that the issue will be discussed in the near future. According to CCTV

Xi Jinping: Working together to create a "cake" for mutual benefit and win-win

The fourteenth summit of the G20 leaders continued on the 29th in Osaka, Japan. President Xi Jinping attended.

When discussing the issue of inclusive development, Xi Jinping pointed out that China agrees to regard high-quality infrastructure construction as an important starting point for promoting inclusive development. The 2nd “Belt and Road” International Cooperation Summit Forum, which was successfully held in Beijing not long ago, reached broad consensus and fruitful results on the construction of “One Belt, One Road” for high quality. We must adhere to the principle of building and sharing, practice the concepts of openness, greenness, and integrity, and strive to achieve high standards, benefit the people, and achieve sustainable goals. The ultimate goal is to better integrate into the global supply chain, industry chain and value chain through all-round interconnection and realize linkage development. We want to strengthen the interface with the UN's 2030 Agenda for Sustainable Development. Building a “One Belt, One Road” development perspective will make an important contribution to the implementation of the UN 2030 sustainable development agenda and the promotion of sustainable development for developing countries. The joint construction of the “Belt and Road” is committed to promoting the common development of all members of the international community. It has become an international public product and an open and inclusive international cooperation platform for the benefit of all parties. We welcome all interested partners to participate and work together to create a "cake" of mutual benefit and win-win. We will continue to promote policy communication and pragmatic cooperation based on the common vision and common consensus of the international community, and promote the world economy to be strong. We will contribute to sustained, balanced and inclusive growth to achieve high quality development and common prosperity.

On the afternoon of the 29th local time, the summit closed. In the evening, after ending the 14th summit of the G20 leaders in Osaka, Japan, President Xi Jinping returned to Beijing.