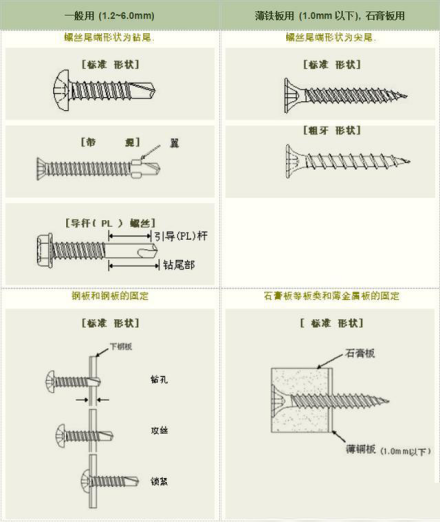 Self drilling self tapping screw use method tutorial

2, the drilling and tapping screws is to make the air duct, hanging, bracket is fixed on the wall, on the floor, a special threaded fittings, used in the column by countersunk head bolts, expansion tubes, flat washer, spring cushion and hexagonal nut, when using, must use first impact electric drill, hammer) corresponding size of the hole on fixed body, put bolts, expansion pipe in the hole again, can make screw nut bolts, expansion tube, install a bulge between the fixed body tight as a whole;

3, from drilling and tapping screws by the screw and the expansion pipe parts, such as screw tail cone, cone of big diameter greater than the expansion pipe diameter when the nut is tightened, screw, move outward by the axial movement of screw cone part, on the expansion pipe outer surface to form a lot of positive pressure, combined with the cone Angle is small, so that the wall body, expansion tube and cone friction self-locking formation, thus achieve a fixed role;

4, self-drilling self-tapping screw on the spring pad is a standard part, because its opening stagger and have elasticity, so called spring washer, spring washer function is to use the wrong mouth sharp Angle into the nut and cushion, prevent nut loose.